My nextdoor neighbor, Pat, tried to make me feel better after the can of cashews. She said “Sometimes I get a craving and buy something I normally don’t and then pig out.”

“But,” Pat replies–she’s really trying to make me feel less weird!–“if the thing is sold in a package, like cookies? I’d eat the whole package!”

Sadly, one of the problems I have with bingeing is that it can snowball. Once the dike has been breached…so later in the evening I returned to the kitchen and took inventory. I found a tiny bit of Cheerios left over from when my nieces stayed with me. Wow, CARBS!! Oh, a bowl of CEREAL!! So I filled a bowl, quickly defrosted some left-over-from-the-days-of-fruit-shakes frozen mango, added a good pour of cream…and pigged out!

THEN!  I returned to the kitchen, found where I had hidden the honey, and mixed some with the last of the peanut butter. Later, I added some honey to the essentially empty peanut butter jar and scooped out a few more teaspoon fulls. 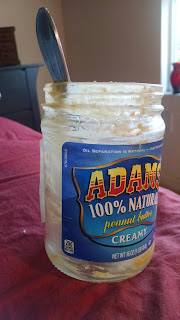 Finally I was finished and went to sleep wondering how bad it would be the next morning (on the scale). Definition of binge eater.

It wasn’t too bad this morning. As I told Pat last night, it wasn’t the end of the world. I knew what would happen: I’d just thrown away a couple weeks worth of diet. The sad thing is there’s a whole bunch of stuff I would rather have eaten if I was going to eat 6000 calories of forbidden fruit. But all I can do now is let it all go and move forward. Too bad today is “Core Monday.”