Why? I haven’t a clue. I know I’m a bit uncomfortable sitting in my living room, especially for an extended period of time. (Sorry to say [sounds very nuts and unhealthy] but I prefer to lie in bed.) Is that the reason? Also, a second friend came over and changed the dynamics of the ‘party,’ and that, too, made me a bit uncomfortable–I would have preferred that the dynamics remain unchanged. Humm, I don’t deal well with…?? I need a shrink???

I DO know that there was some rationalization going on: Perlmutter and the other ketonic diet gurus all say basically “eat all the fat you want.” Maybe my body needed more fat today?? I can’t buy it. I always hesitate to keep almonds in the house because I’m too prone to just gobble them up. I suspect that if there hadn’t been almonds, I would have cut some cheese–only because it’s quick and easy. I would definitely NOT have been interested in grabbing some other things readily available such as grape tomatoes, cream, almond milk, hard boiled egg, kipper snacks, lettuce. A spoonful of almond butter has tempted me in the past.

Ooooh, something else was different! I changed my water! (Remember the ongoing search for a substitute for Chrystal Light?) I had just bought some lemon juice, hoping to flavor my water; but the fact is I didn’t like it. (Maybe I should have put some stevia in it, but whatever: I didn’t like it.) And I always drink that liquid like a dying person on the desert.

oK, so something learned: don’t EVER face an evening without an acceptable beverage! I guess I use that beverage the same way I use the almonds? 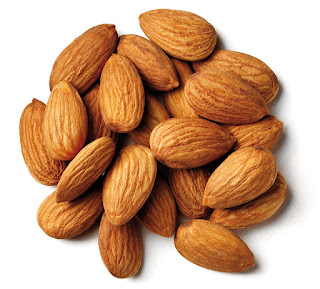